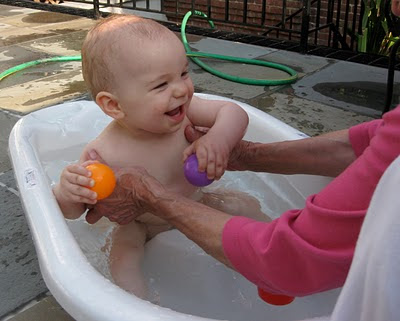 So, we haven't gotten around to getting an inflatable pool.

I saw one at Costco last week, but it was gigantor. Like, in the pictures on the box, it pretty much looked like a family of four was enjoying water escapades.

It was not a possibility, much fun as it might be. Because while it would've fit, I think we'd have had to put the grill in the pool. Which just seems like a bad idea.

And then I just didn't make it to Target. And then it got sunny and hot hot hotasHadeshot.

So Betty took Big J's bathtub - the one with the intergalactic instructions - out back. She filled it up mid-day and let the water heat in the sun.

He loved it. They had an afternoon pool party.

The tub now lives out there. We've begun referring to it as "the pool." Seriously. It's like the world bathtub disappeared from our vocabulary.

Every afternoon he gets a scrub-down in the pool.

We had friends over last weekend and we suggested the kids might like to take a dip in the pool.

And then we had to be all, "Uh, by pool we mean that white bathtub right there."

In your opinion this is:

A. No biggie. It's tantamount to running in the sprinkler. (Which we can't do because we have no yard. Or sprinkler. Also, J can't stand up on his own, much less run.)
B. Definitely trashy. What's next - letting your kid chew on a crumpled can of Bud from the recycling pile, which is probably located next to the car on bricks?
C. Oddly charming. Nakey babies can get away with anything.
Posted by Lemon Gloria on Wednesday, June 02, 2010

Email ThisBlogThis!Share to TwitterShare to FacebookShare to Pinterest
Labels: love and happiness, the Betty, the boy