When what I really need is an invisibility cloak. Or my own personal censor. 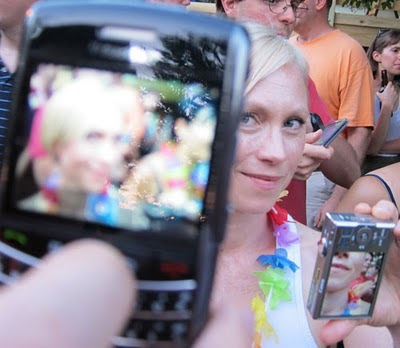 As those of you who know me know: I tend to think I'm invisible in public. I'm always shocked when people recognize me.

Also, I went on a lot of dates when I was single.

Like, sometimes four dates a week. Friends said I effectively went on at least one date with every single guy in my zip code. And a few outside it. Lawyers, nearly all.

And except for the few I pined over, I generally blogged about them, charged forward, and got on with life. Which has been busy over the last couple years, as you know.

So last week I got an email from a guy I'd gone out with a number of times several years ago. The one I made very uncomfortable by pretty much demanding he tell me five things he liked about me.

Shocking I was single for so long, no? Just be nice and agree, if you would.

So the email. He was leaving his law firm. It was a mass thank you, nice to have worked with you, here's my new contact info kind of email.

I replied, saying the message clearly wasn't meant for me, but I was glad to know he was well. We have mutual friends, and I said I'd heard he was married, and congratulations.

He replied and said he'd heard the same of me, congratulations. And also, he'd recently seen a video of me in a demonstration in Dupont, so he saw that I have a child, and congrats on that as well.

And then I just thought, oh thank goodness I'm married. To someone who is fine with things like Boobquake. Because while I don't get out as much, it's like I maximize my say-and-do-inane-things time while I am out.

Now I no longer live in fear that someone I've gone on a couple dates with will find the blog/see me falling into a hole on the sidewalk/hear about that time I took off my clothes in public/God knows what else.

(And why the fuck was I in the first place, really?)

But with this I do wonder how many men saw that video and were like, "Hey, I went on a date with that woman! And she got herself married! If I ever meet him, I'm totally buying him some shots. I bet he needs them."
Posted by Lemon Gloria on Tuesday, June 22, 2010

Email ThisBlogThis!Share to TwitterShare to FacebookShare to Pinterest
Labels: marriage